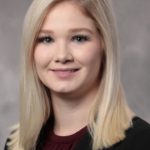 Macaulay graduated from the University of Washington with a B.A. in Political Science and a Minor in Middle Eastern Studies. She then earned her J.D. from Seattle University School of Law in 2019. At Seattle University School of Law, Macaulay served on the Moot Court Board as a National Competition Co-Chair (2017-18) and President in (2018-19). She was also an article and staff editor for the Seattle Journal for Social Justice.  During her last year of law school, Macaulay worked at the Snohomish County Prosecuting Attorney’s Office as a Rule 9 Extern where she tried misdemeanor cases in district court.

Macaulay grew up in Auburn, Washington and from a young age competed nationally in competitive horseback riding.

Mike Spence Honored as Instructor of the Year